It’s that time of the year again, and this means that we have good news at Coco Bodu Hithi… MANTA RAYS! The animal kingdom is home to fascinating and mysterious creatures that can amaze your heart. We love having the Manta Rays from December till April every year.

MANTA Rays are found to be distributed only in tropical, subtropical and temperate waters of the Indian, Pacific and Atlantic oceans. They visit North Malé-atoll as part of their migration around the Maldives. Coco Bodu Hithi, is only 15 minutes away by Dhoni is Rasfari North reef, a cleaning spot that Manta rays frequent for small fish to clean them. If you are lucky, there is a chance to spot these mesmerizing rays while snorkelling at this reef. 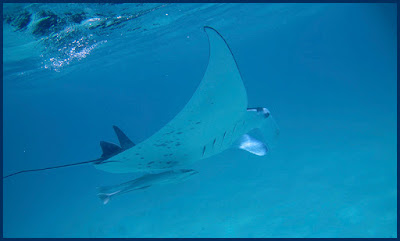 Reef Manta Rays are mostly solitary creatures, coming together only to mate and feed. When feeding, they can form loose aggregations of three, and large aggregations of as many as 150 individuals! When a Manta Ray is feeding, the cephalic lobes which are usually rolled like spirals on either side of their heads are straightened out to help funnel food into their large gaping mouths.Their diet consists basically of zooplankton.
You can even contribute to our citizen science projects and assist our marine biologist by taking pictures to identify Manta Rays.There are two species of Manta Rays: the reef manta (Manta alfredi) and the giant manta ray (Manta birostris). Both species are classified as “vulnerable” in the Red List of the International Union for Conservation of Nature. To identify a Manta Ray, you need to look at its underside as each individual has a unique pattern of spots on its belly. This ventral view is not only important to identify individuals but it also reveals the sex of the Manta. The largest species is the giant manta ray, whose central disc can measure up to 9 meters wide.
Manta Rays have been observed jumping out of water, presumably to eliminate parasites or to communicate, although there is also the possibility that the act constitutes a game. They are agile and elegant swimming makes them being compared with birds flapping their wings during flight. Make sure to book your personalized Coco Bodu Hithi, Manta Ray adventure with IRIS Reps this New Year.
Posted by irisreps india at 21:54 No comments:

Step Into the Spectacular


Step Into the Spectacular


Opening January 29 2018, MGM COTAI, Asia most innovative resorts in the world will bring to you a one-of-a-kind entertainment experiences. MGM Theatre, Asia's first dynamic theatre with resident shows, is also home to a unique art collection of over 300 pieces of contemporary art. The resort will become Macau's most creative culinary destination with never-before-seen-in-Macau dining concepts curated by world-renowned celebrity chefs.
MGM Theatre at COTAI boasts of the world’s largest permanent indoor LED screen – offering 28 million pixels of viewing pleasure on a giant 900-square-metre ultra HD screen – the size of three tennis courts combined.The theatre will be home to three resident shows with two launching first, The Experience and Destiny. The Experience, inspired by the soul of Macau, is a ten-minute, mind-bending technological symphony that showcases the theatre’s engineering and architectural dexterity. Meanwhile, Destiny is an action-packed, immersive theatrical production that is inspired by the concept of TV game shows and adventure video games.

With 1,390 custom designed rooms for accommodation, best -in-class service and cutting edge technology, MGM COTAI has a pleasant surprise just in store for you!
MGM COTAI has a diverse collection of nine restaurants brought to you by celebrity chefs, showcasing exceptional steakhouse Grill 58º, innovative Nikkei concept Aji, relaxed Californian restaurant Coast, and modern pastry shop Janice Wong MGM.
Grant Bowie, Chief Executive Officer and Executive Director of MGM China Holdings Limited says "MGM COTAI has been uniquely and meticulously designed to demonstrates our commitment to supporting Macau's continued evolution into a global destination for tourism and leisure. As planned, on January 29, our exceptional resort will open its doors to the public, to discover Macau's rich content and all of the treasures we built and dedicated for them. Following the opening we will host a series of celebratory events that will carry on throughout 2018".

IRIS Reps welcomes you to participate in the grand opening of MGM COTAI on January 29th as they debut this award-winning resort to the public and showcase their new entertainment experiences in Macau for the first time. It would be an event of a lifetime.

Spectacular awaits!
Posted by irisreps india at 00:31 No comments: