Italy - the face of many seas

Being a true blue Italian and a Piscean, I treasure the water that surrounds us. Including islands, Italy has a coastline of 7,600 kilometres. It is flirted by so many seas -  Adriatic Sea, Ionian Sea, Tyrrhenian Sea, Ligurian Sea, Sea of Sardinia and Strait of Sicily. I wonder how many countries can boast about the pleasure of so many seas. I have a particular fascination for the sea. Unlike lakes or rivers, a sea is defined by its vastness. The expansiveness of the sea deeply attracts me. When I am particularly depressed about something or somebody, I just have to go to the sea and look at it. The gentle waves, the flickering sun light or the silvery moon light brings sparkle as much on to the crest of the waves of the crystal clear water as to the corridors of my confused mind. It energises me and yet calms my mind. Something that tells me all will be well. 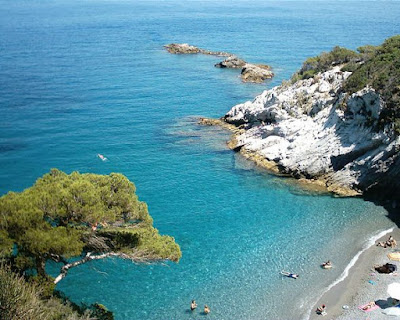 Take Tuscany. It is known for rolling hills. It also has a beach scene with sandy white shores and quaint seaside villages. In western Tuscany, Maremma with its ancient root and beauty lends a feel of timelessness. Long beaches, blue sea, black rock, hills covered with woods, marshes and flat lands gives a diverse spread as much in colour as in topography. You can’t miss the thermal baths or the acquacotta soup. There are water sports too like sailing, windsurfing, scuba diving… you name it, and we have it. You must have heard about our wild Carnival Festival.

Yes, sea for me is as much of stillness as of surfing. My fascination for the sea also extends to the beach. How I wish we have libraries out here like the way Dubai municipality is planning.
Though Venice is surrounded entirely by water, but there are few beaches in the city. I love to read William Shakespeare’s Merchant of Venice in one of those thatched beach huts. I feel so empowered as I read about Portia. I have read it so many times but I still feel good every time I pick up the book. Shakespeare made women intellectually so illuminating.

Termed ‘One of the best places in the world’, beaches around Sicily range from sandy white shores to exotic black sands. The journey to the beach is part of the fun as beachgoers climb aboard a funicular or cable car for a quick ride down to the beach.

By the way, don’t forget the coves. One of them where I often frequent is known as “Grotto of Arpaia”. Protected by a steep cliff, the little grotto can only be reached by boat. It has therefore preserved its natural environment and the clean water which had put a spell on the British poet Lord George Byron who spent many an afternoon admiring the blue sea; the foamy waves impacting against the rocks and listening to the quiet sound of the sea life. It is the perfect place for snorkeling and for a boat trip with a final splash in some crystalline like waters….
Posted by irisreps india at 03:17 No comments: